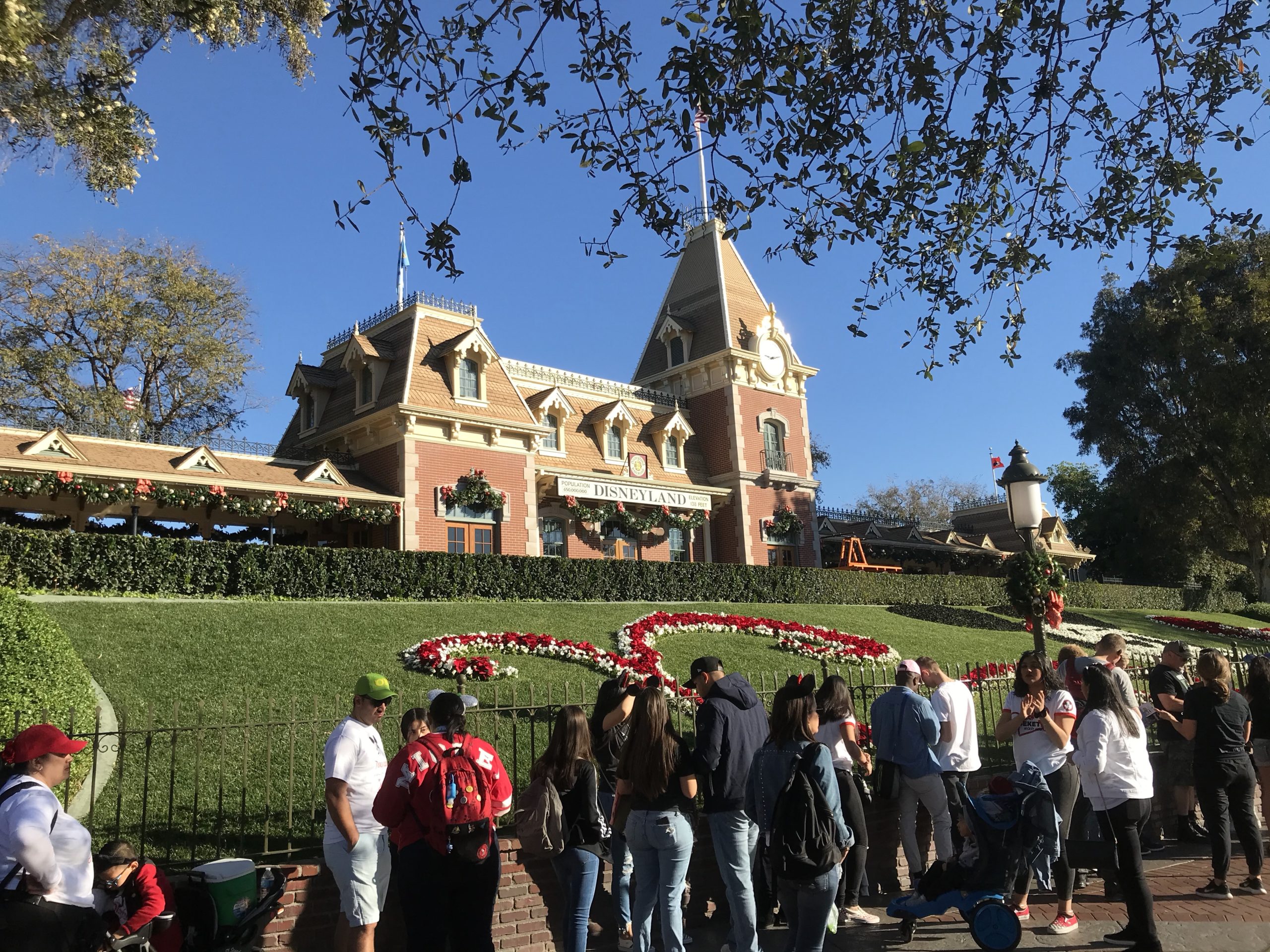 For my first time to this Disneyland, we decided to get the three-day ticket. Which meant we’d spend two days at the Disneyland park and one at the California Adventure Park. In my opinion that is the best way that we could get to see everything in both of the parks.

We began our adventure at the Disneyland park because there was so much that we wanted to see while we were there. We had done some research before we went there to figure out which of the rides if any were going to be going through refurbishment. One we found out was hyperspace mountain so of course, we had to go on that one while we were there. Sadly when we decided to line up initially it said a 45-minute wait but in reality, ended up being like a two-hour wait. I can safely say it was an extremely enjoyable ride and it was changed to a Star Wars-themed ride. I wanted to ride on it again but I certainly did not want to wait that long for the ride again.

Because we didn’t have the fast pass today we were using the app to find all of the rides with the shortest wait time and then go on them. Of course, we had to go on the Nemo ride when we saw it. It was probably one of the longer rides but it was a very cute little experience. We wanted to make sure that we visited all of the areas around the park on day one. Mainly so that we could get as much filming done on my GoPro and camera. So we didn’t have to do any of the filming when it was dark or on our second day and we could more just enjoy the park a whole lot more. We checked out the Mickey Mouse area at the back and saw all of the cute rides there and saw several of the characters. From here we went through fantasyland and made our way to the Star Wars.

When you went through one of the gates into Star Wars Galaxies Edge it really did feel like you were in a different world. So many new things to look at and experience. So many Star Wars characters to see. We, of course, decided to go on the ride in the called Flight of the Falcon. We got to perform as the gunners on the ship which I thoroughly enjoyed. Sadly we were unable to experience the new ride that was going to be available ten days after we left Los Angeles. It just means that we will have to come back and see it again.

For the remainder of the day, we wandered around the other lands and went on several rides that were very enjoyable. Like Splash Mountain, I am very glad that I got placed up the back of the boat because then I was able to get the least wet. We finished off the day by going on the three last rides Pirates of the Caribbean, the Jungle cruise and the Indiana Jones ride. All three of them were so much fun. Especially the Indiana Jones one, it took us a bit to get through the line but all of the waiting was well worth it, we had to go on it again the next day.

I had decided that the next time that I happen to come to Disneyland again I will make sure to bring a lot of money. This will specifically be for all of the Star Wars memorabilia that I will want to get. That would be getting a full Jedi outfit, one that I would be able to wear to Comicon should I ever go. Then getting a proper lightsaber built for me would be the next step. After that, I would want to to create my own little droid. All of them would set me back a decent amount but in my opinion, they would all most certainly be worth it.

The second day we decided to head back to the Disneyland park because it was my birthday. For my birthday I wanted to do as much of the Star Wars stuff as I can. I can honestly say that I got my fair share of Star Wars attractions that day. Because we had done the majority of the rides on the first day we were able to pick and choose which rides we wanted to go on. We also decided it was the best idea to purchase the MaxiPass for our tickets.

We set our plan in motion to go on all the rides we did not in the previous day and to also go on any rides that we really wanted to again. Hyperspace Mountain was open again so we used our fast pass to go on it but we had to wait for the fast pass to become active. We went on the Star Tours ride which was a sit-in ride that had a screen and moved you around. It was a tour company based in the Star Wars universe. We also went on the Matterhorn, god it was a fun ride but it really threw you around. I felt quite bruised up after that one but we did it again later on in the day.

We also explored adventure land in the day this time because we only go to see it during the night the previous day. The jungle cruise was even better during the day because you got to see all of the animals that were everywhere. After this, we made sure to check out both the Haunted house and Tarzan’s Treehouse. The Haunted House was still based around a nightmare before Christmas.

Later on, we ended up going in the Star Wars ride again. However this time I went on it like several times in a row. Even though I played the engineer for most of those times. I really enjoyed the ride that I could have just kept going back more and more.

We finished the night by watching the Fantasmic water show. It was filled with a multitude of fireworks along with a display of many characters. A lot of which were dancing and acting along with the presentation that was going on. A very good way to end my birthday. Would recommend going to Disneyland on your birthday.

For the last day, we decided to go to California Adventure Park. We thought that we were going to be able to use our magic morning pass for this park. But it is only available to use at the Disneyland park unless you are staying at the resort. We decided it would be best to check out Downtown Disney. Although there wasn’t much open at the time it was good to see everything there.

When it was time for us to go in we headed straight for the Guardians of the Galaxy ride. It used to be the tower of terror. It was a whole lot of fun but not recommended if you have just eaten. There was a whole lot of ups and downs, could lead to an upset stomach. But that is what made it that much better. They are building a new marvel section at this park, so when that actually gets finished it looks like it will be really enjoyable.

We headed straight for Cars land. The movie, Cars, has to be one of my favourite Pixar movies. It felt like we were right in the main town. The cars ride was so much fun. On the ride, we got to race the car beside us and this time we won. Walking back we saw that we got to get some photos with Mater and we just missed out on getting them with Lightning McQueen.

From there we walked around the rest of the park. We went on the only roller coaster there, it was called the Incredicoaster. As the name suggests it was based on the Incredibles. So much fun we had to go on it a few more times later on in the day. We had to check out the toy story ride as well because why the hell not. But while we were waiting we decided to get some treats, Alana with a red velvet cupcake and me with a giant chocolate chip cookie.

We went on a few more different rides and then we decided it would be best to get lunch where we were. Choosing the pizza and pasta place was the best idea because it was so filling. While we were eating lunch we got to listen to a female mariachi band. They were brilliant and I could have listened to them all day long.

Of course, Alana said that we had to go on the water ride while we were there because it was supposed to be fun. We didn’t go in with a full raft, so I went to the end thinking I was making room for others but I didn’t need to. It really didn’t matter where you were sitting, everyone got a varying degree of wet. As much fun as it was the end result was me becoming saturated from my shoulders to my feet. To try and dry off we decided to go on the Little Mermaid ride. It helped to dry us off a little bit but there were fans in there and that made it rather chilly.

We decided not to stay there for the entire day because we were starting to get rather tired during the afternoon. It was all of the travelling too and from the parks including the travel around the parks themselves. I can safely say that thoroughly enjoyed all of my time at these parks. I will without a doubt be coming back to these parks. Here’s hoping that all of the new rides are completed by the time we decide we are coming back.

I am an Aussie traveller who wishes to travel the entire world. I have currently been to 29 different countries. that is including my home country. I want to bring everyone along with me on my adventure.

My Life In Canada: End of the road trip