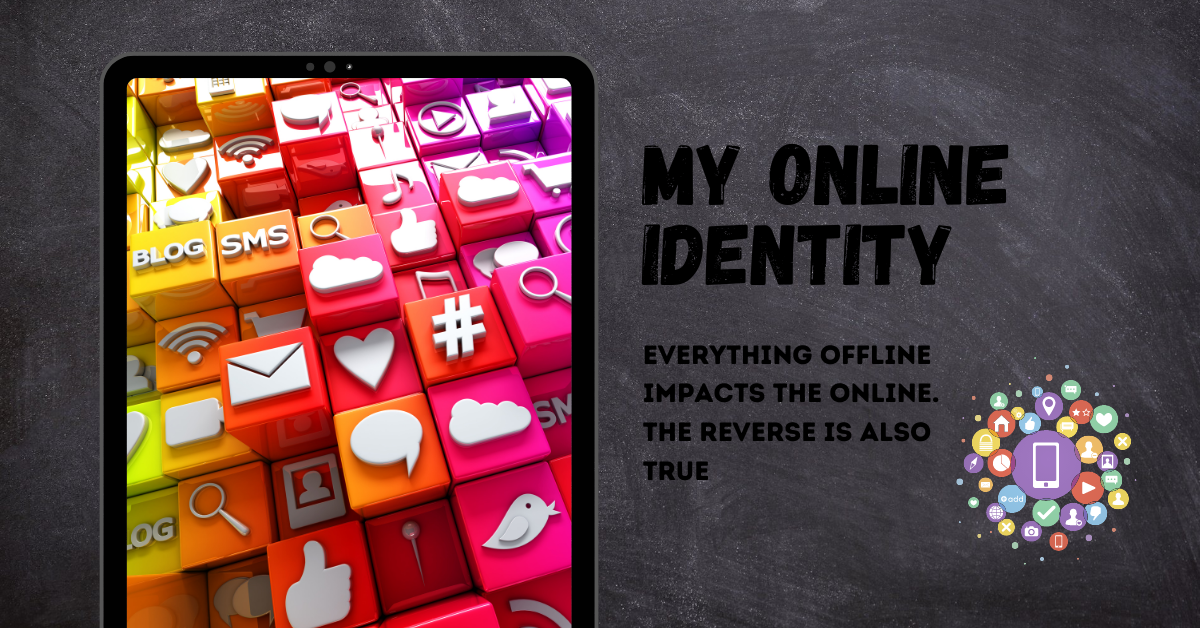 Our online identity can be formed by a variety of things, and many academics have different ideas as to what may impact a person’s online identity. However, there is often a general consensus around the fact that one’s offline life and real-world identity would help to form the core of what would become someone’s online identity.

In the past, my online identity used to take the form of trying to make as little splash in the online seen as I possibly could. One of the main reasons was the fear I had around social media and all its associated entities. the fear was surrounding the aspect that I didn’t want anything to come back and negatively impact me in the future. This aspect changed over time, I came to the realisation that I wanted to be able to impact peoples lives in one way or another and to do this I would need to put myself out there in the world for everyone to see. It was also in no small part due to the aspects of growing up watching people on YouTube vlogging and sharing their lives with the entire world. I wanted that to be me. That was how my online identity started to shift and more of my offline identity began to bleed into what I shared online. Being the most authentic that you can is often considered one of the best ways to get a following of the right kind of people. Smith & Watson (2014:70) argue that our ‘online lives exist in complicated relationship to offline lives and to what has been termed the “outernet”’. Their argument states that our online lives that have been created are affected by our offline lives, they form a complicated relationship with one another.

Smith & Watson (2014:75) articulate the idea that ‘users find online environments potent sites for constructing and trying out versions of self’. Many individuals use their online spaces to figure out their identity often through trial and error, it can be an easy and good way to test out what you might want to put forth about yourself.

Many of the aspects of my online identity that changed were led by my real-world experiences along with growing up and maturing. The act of maturing helped me to form my online identity into what it is today. Over the course of several years, I interacted with various groups ranging from travel to gaming to creative writing, each of these groups helped form my identity as it is. I took pieces from the people that I met and used that to help frame certain aspects of my identity.

As more time is spent online, a person’s online identity will start to form. Certain aspects of this online identity can be from the connections they make with other online and the communities they come in contact with. As Costa Pinto et al. (2015:399) remarks in their article ‘online communities enable people to “recast identity in terms of multiple windows and parallel lives”’. These remarks help to establish the idea that someone’s online identity is not a static entity that cannot be changed.

Marshall argues about the construction of the self as a ‘performance of the self was a conscious act of the individual and required careful staging to maintain the self’. A person’s identity is tied in with the idea of the self, and according to Marshall, it is an act that someone can perform. Continuing with this further Marshall argues that ‘what is constructed via Facebook but equally through Twitter is a construction of character for a kind of ritual of the performance of the self’ (2010:40).

Fisher et al. argue that an individual’s personal identity or self-identity in the realm of online activity is ‘a context-mediated activity in which social network users co-create the “context of communication” in which their narrative identities will be interpreted and understood’ (2016: 133). Fisher et al. also state that ‘online life affords us new opportunities to explore identity through mechanisms such as creating an avatar in a game or a virtual world’ (2016: 133). These opportunities can help to form your online identity or the identity that you want to present to the world. Each aspect that you share with the virtual world helps to form the overall identity that you either wish to present or that you will be viewed with having.

Smith, S and Watson, J 2014, ‘Virtually Me: A Toolbox about Online Self-Presentation’, in Poletti, A and Rak, J (eds.), Identity Technologies: Constructing the Self Online, The University of Wisconsin Press, Madison, pp. 70-95.

My decision to come home

My First Journey Into The Unknown