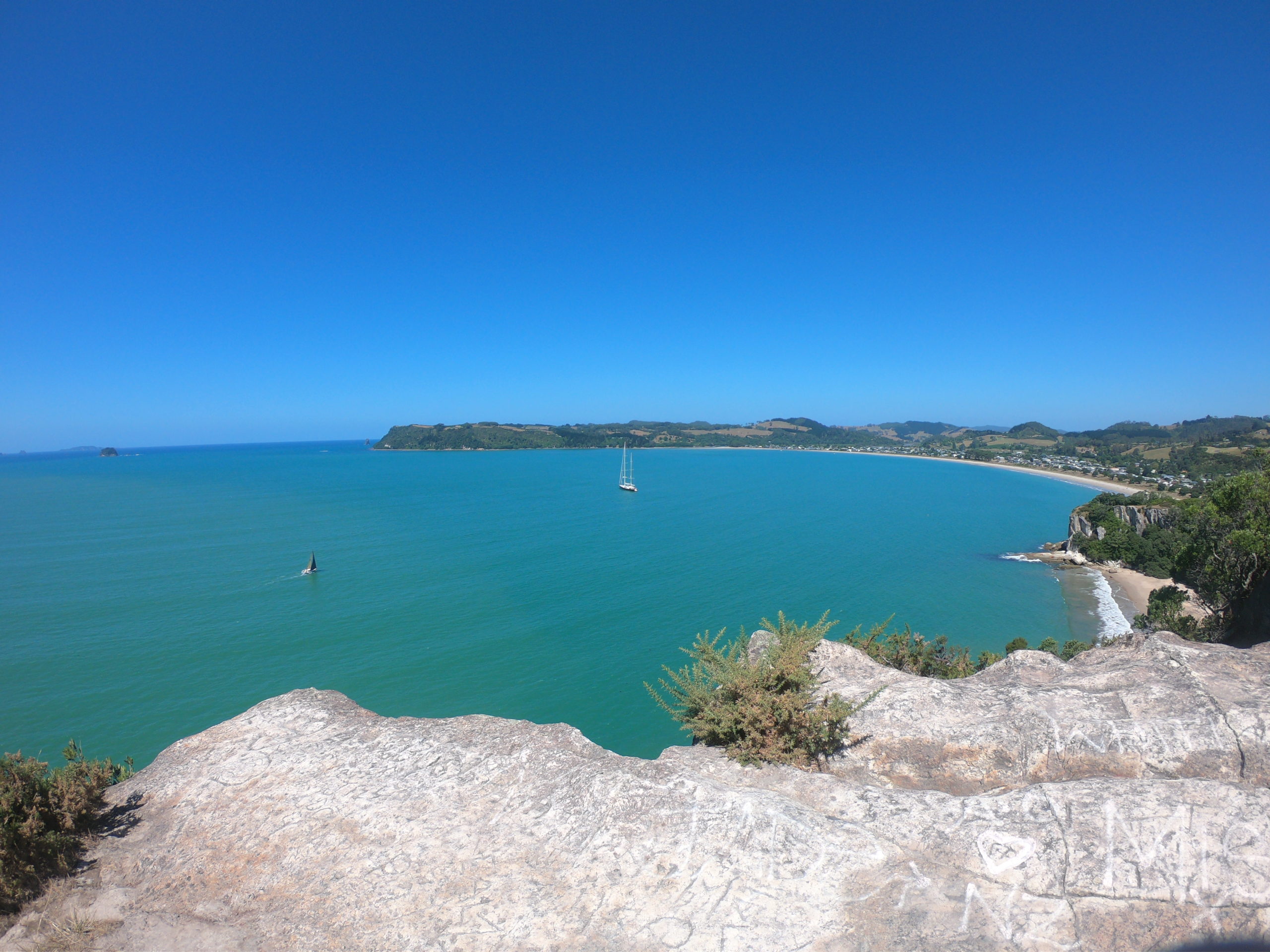 Today began the last leg of our Contiki journey, we picked up a large group of new people for the last part, many of them we didn’t get time to know but the ones that we did were lovely human beings.

We made our way to the Paihia or alternatively put the Bay of Islands. The drive up we stopped off at the Parry Kauri Park and got to walk through it.

The Kauri Trees are known for their ability to self prune. This leaves the entirety of their trunks somewhat smooth. It resulted in a vast majority of them being cut down to be used for wood for housing.

Once we had arrived at the Bay of Islands we went to the Waitangi treaty grounds and got a tour around the area. We had our own little tour guide who gave an in-depth understanding of what occurred in the past at the Waitangi Treaty Grounds.

The treaty that was signed here meant to establish a British Governor of New Zealand, while also considering the Māori ownership of their lands and other properties and give Māori people the rights of British subjects.

Soon after we finished the tour we had to rush back to the hotel. Alana and I had to get changed and then get ready to go Sky diving. I was getting really nervous the closer and closer it got.

When we got there we had to get suited up, I had chosen to jump out of the plane at 20,000 feet. When we were going up there were several others on the plane who all jumped out at 12,000 feet. It felt like I blinked and they were all gone. From there we had to wear oxygen masks to help us breathe and when we reached the correct altitude I had to help my jumpmaster open the door. It was the first-ever time I had been on a plane with the door open. The flight down went by in what felt like a blink of an eye but when we opened the parachute I was able to help him guide it to some degree. It was one of the best experiences I have ever had.

Today was our full day in the Bay of Islands and we got to do what activity we had chosen beforehand. Alana and I decided that we wanted to go up to Cape Rēinga.

We drove for several hours up the coast, we stopped off at the massive sand dunes along the way. They seemed to appear out of nowhere and we got ride surf down them on our stomachs on bodyboards. I managed to do it once, the hardest part I believe was actually just before you started to slide down the hill.

Once we arrived at Cape Rēinga we were given time to make our own way down to the viewing point and the lighthouse. The walk down was spectacular and I enjoyed every moment of it.

The Māori’s believe that the cape is the point where the spirits of the dead enter the underworld to return to their traditional homeland of Hawaiki, using the Te Ara Wairua, or the ‘Spirits’ pathway’. Cape Reinga is the virtual stepping off point of the north island of New Zealand.

On the return journey, we got to drive on the beach while we were on the bus which was an entirely different experience altogether. When we had stopped to get out and have a look at the ocean we saw some wild horses. After that basically, everyone passed out and slept most of the way home.

We made our way back down to Auckland, this marked the end of our Contiki and safe to say it was a very teary goodbye to the group of individuals that we had spent the last 17 days with. A lot of these people we may never see again but I do hope that isn’t the case because they made our time that much more enjoyable.

Along the way back down we stopped off at one the waterfalls that are considered a great stopping point. They were called the Fairy falls. They were located in the town of Whangarei.

After saying goodbye we made our way to the hostel that we would be staying in for the next few days while we were in Auckland. Shortly after we had gotten there we met up with one of my friends (Nate) that I had made on my previous Contiki’s in Eastern Europe. Nate was going to be showing us around Auckland and also the surrounding area.

That night we went out for drinks and met up with some of the people from both of the Contiki’s although they weren’t there for very long. But we had a very enjoyable night all the same.

We began our exploration of the surrounding areas of Auckland since Nate was able to drive we were able to see a lot more places. We made our way west to a beach area called Piha, it is located east of Auckland.

The beach was gorgeously flat with a massive rock in the middle of it and we decided to hike to the top of one of the hills to get a better view of the area and be able to take the best photos too. After that, we made our way back to Auckland.

We drove around to several areas in the outskirts of Auckland just to be able to say that we had been to everywhere. We made time to visit SEA LIFE Kelly Tarlton’s Aquarium. In the aquarium, we got to see all different kinds of creatures, the best part was seeing all of the penguins. Lastly, before properly heading back, we stopped off at Mission beach. From here you have a perfect view of the volcano island called Rangitoto.

The day ahead was going to be a long journey, so we had to get up early and travel eastward from Auckland up into the Coromandel Peninsula.

Our first stop off was at Hot water beach. This beach, in particular, gets its name from the fact that when you dig a deep enough hole near the water, the water that is in the hole is hot. We did not stay long enough to dig a big enough hole but we got to see many of the other people getting really into it.

The best part of the day was when we arrived at Cathedral Cove because here they filmed sections of one of the Narnia movies. I have always found it very interesting to go to the film locations and see what they look like with my own eyes. To get to that point though it was a decent walk there and therefore it was a decent walk back, overall I thought it was worth it.

We had decided earlier that while we were there we would also go for a swim. The waves were massive and they knocked me over multiple times but that just made it more fun. It felt like it was a surf beach but the massive waves were not too far out so I could easily touch the ground. The next day I felt extremely sore, both from using my muscles so much and also from the sunburn I inevitably received.

The last stop of this drive was at Cooks Cove. It was a picturesque little cove in what felt like the middle of nowhere but we got some nice photos of the area. Since it was such a sunny day the water looked bluer than usual. From here we headed home and I can safely say that I was exhausted by the end of it and easily fell asleep during the car ride home.

Our last day in Auckland was a short one as we had to just fill in time before we needed to head to the airport and travel down to Wellington.

We had bagels for breakfast from the ugly bagels store and they were delicious. From there we went to the Auckland War Memorial Museum. We learned about all the islanders and their culture along with different war history that involved New Zeland.

When we got to the airport, it was time to say goodbye to my friend that I had made n my previous Contiki. It was sure good to see him again, and it wouldn’t be long before we would be travelling Canada together.

We caught our flight and we arrived in Wellington and in the airport were the giant eagles from Lord of the Rings and atop them road Gandalf.

We checked into our hostel for the next few days and it looked like it was an old hotel that had been converted into a hostel. It was not the most conveniently located hostel. But it did allow us to be able to walk through the streets of Wellington.

Today was the day that we got to visit Wellington zoo. The Wellington Zoo is not a large zoo but gives the feeling of wandering through a vast forest visiting a multitude of animals in their natural habitat.

Our main reason for going to the Wellington Zoo was to experience one of the close encounters that they had at this zoo. The one that we chose allowed us to be able to get up close and personal with the cheetahs.

We practically were face to face with them. While in the cage we had to sit on a specific spot and we weren’t allowed to move from there and we were also advised not to make too many sudden movements. We realised that they are just like big house cats, they purr the exact same as them and they also love all the pats they are given. Their tails were also really quite heavy and if they moved it quickly it could have felt like a whip.

We spent close to the entirety of our day at the zoo, making sure that we got to see each and every one of the animals that were there. There were many different animals to see in such a small space. You got to walk through a bird enclosure and see the Keas flying around. you just had to try and not startle them. Of course, we had to see all of the monkeys, the bigs ones and the small ones. You can’t go to the zoo and not see them.

My other favourite part of the day was when we got to see the Red Pandas which just so happens to be my favourite animal. We got to see one of the keepers do a talk about them and during this talk they also managed to feed them as well. They were just so damn cute.

All in all, I can say that seeing all of the animals at the zoo was an amazing experience. I think the next time that I come to Wellington I will come back here. Then I will try and experience one of the other close encounters that they have to offer.

My Days in New Zealand Week 2

A weekend away in Seattle