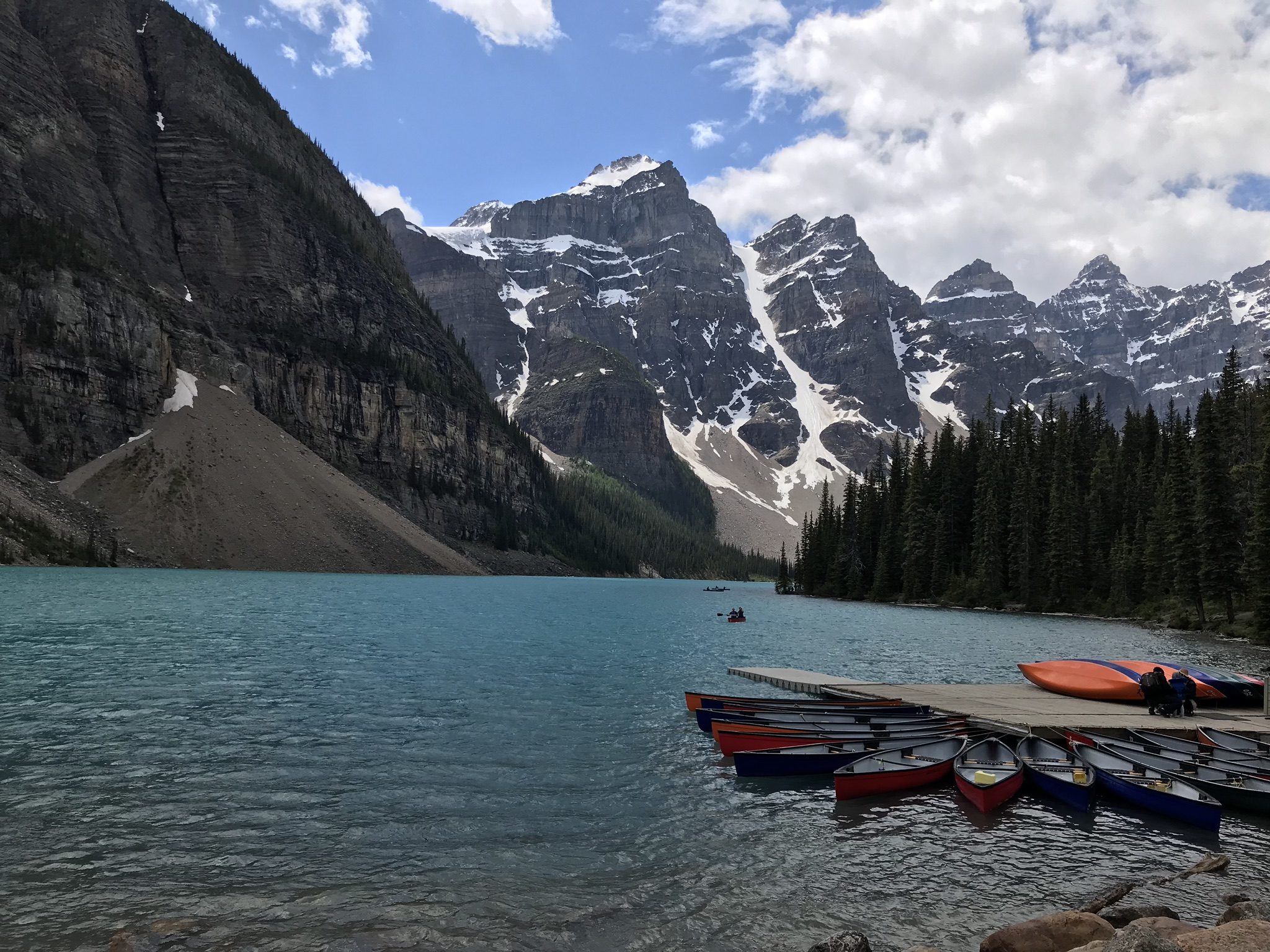 This video is from when I took a road trip up into the Canadian Rockies. With two of my close friends we visited these three lakes around Banff. All three of them were beautiful in their own right. I can not wait to be able to experience seeing them in person again in the future. There are many other lakes that I was unable to see. But sometime soon I will make sure that I do and they can definitely be added to the list here.

But for now, these are the three best lakes that are around the area of Banff.

Bow lake is located about 30 minutes (38km) north of Lake Louise. It lies right next to Highway 93 (Icefields Parkway) in the Canadian Rockies. It sits at an elevation of 1,920 m (6,300 ft). The lake is at the foot of the Bow Summit and receives most of its water from the Bow Glacier.

Since it’s located right next to the road it is a perfect stopping point for a nice stroll or picnic if the weather is nice. When the weather is calm you can see the aquamarine colour of the water. Because this lake is just located right next to the road you are able to visit it all year round. Some of the lakes in the park are closed off during the winter because of access dangers. But this lake would be beautiful in both the Summer and the Winter (if you go during winter make sure that you’re rugged up).

There are three good hikes that allow you to see the best of the lake (all are different difficulties). The Bow lake hike (easy), Bow Glacier Falls (intermediate) and the Bow Hut (challenging). The first two can be done all year round, whereas the last one is recommended to do between June to October.

Of course, everyone has heard of Lake Louise at some point. It has to be one of the most famous lakes that are in Canada. Practically every travel page on Facebook has posted about this lake at some point or other. Everyone has seen photos of the Fairmont Hotel on the banks of the lake. It is a luxury resort hotel that was built in the early decades of the 20th century by the Canadian Pacific Railway.

Lake Louise is named Lake of the Little Fishes by the Stoney Nakota First Nations people.

The best time of day I would recommend seeing the lake is in either the early morning (as pictured above) or in the late afternoon. Both times are when the sun isn’t as harsh and you can get some gorgeous photos of the lake and the mountains in the background.

Whereas the best time of year is all year round because this lake is one that doesn’t get closed off during the winter.

There are several things that you do while you are at the lake. Although there are some that are dependant on what time of the year you go. You can kayak on the water and get to see the water up close and personal (just be careful not to fall in). There are several hikes that you can take through the mountains, all are differing difficulties. The hikes let you see all of the mountains up close and you can look back to the lake too.

Moraine Lake is 14 kilometres (8.7 miles) southeast of the hamlet of Lake Louise. The lake is situated in the Valley of the Ten Peaks, at an elevation of approximately 1,885m.

As the parking lot at Lake Moraine fills up rapidly in the early morning. It’s best to drive to Lake Louise and then catch the bus to the lake or follow any directions given. This bus leaves approximately every 20 minutes.

Lake Moraine was one of the most gorgeous lakes that I have ever been to. The bright blue water that was right in front of my eyes didn’t quite seem real. It was as if someone was editing the water before my eyes. It felt too unnaturally blue.

The best times to go see Lake Moraine is similar to that of Lake Louise, in the early morning or late afternoon. But if you aren’t able to get there at that time the lake is beautiful regardless. The photo above was taken during the middle of the day and is utterly stunning.

To be able to see Lake Moraine you would have to go during the summer or warmer months as it is closed off during the winter. This is due to the heavy snowfall that the area receives and the risk of avalanches.

There are many hikes around this lake as well and all of them are of varying difficulties. You should only do the ones that you think that you would be able to do. One of the best ones is just walking around the water’s edge and seeing the mountains and the water so close.